William O. Lewis, III – a.k.a. Grampa Bill has a website full of biographies of LDS General Authorities. Though he was kind to list David Whitmer (since the LDS Church Almanac does not) his hack of David’s Proclamation is unnerving. The following was removed without the slightest mention that he did so:

And that no one may be deceived or misled by this statement, I wish here to state:

That I do not endorse polygamy or spiritual wifeism. It is a great evil, shocking to the moral sense, and the more so, because practiced in the name of religion. It is of man and not God, and is especially forbidden in the Book of Mormon itself.

As to the High Priesthood, Jesus Christ himself is the last Great High Priest, this too after the order of Melchisedec, as I understand the Holy Scriptures.

Finally, I do not endorse any of the teachings of the so-called Mormons, of Latter Day Saints, which are in conflict with the Gospel of our Lord and Savior Jesus Christ, as taught in the Bible and Book of Mormon; for the same gospel is plainly taught in both of these books as I understand the word of God.

The following screenshot is from “Grampa Bill’s” web site with a red line added where the above should have remained: 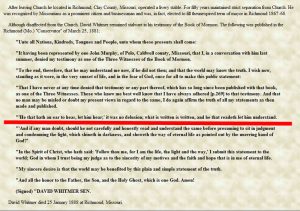 In light of the fact that everything David “PROCLAIMED” in his PROCLAMATION is Book of Mormon based, “Grampa Bill” has also disparaged the Book of Mormon and should repent to avoid a confrontation with Mormon and Moroni along with David Whitmer at the judgement bar.