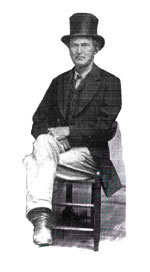 After the martyrdom of the Prophet and his brother Hyrum in 1844, several scisms arose among apostates and members weak in the faith. Among these was one fostered by Wm. E. McLellin (an Apostle in the Church from 1835 to 1838), and Martin Harris (one of the Three Witnesses to the Book of Mormon, who had alienated himself from the Church). McLellin published a paper called the “Ensign of Liberty” at Kirtland, Ohio, in 1847, in which he set forth the claims of a church organized by him and his associates, called the “Church of Christ,” of which David Whitmer was chosen president.

The members of this sect asserted their belief in the Book of Mormon and the New Testament, but expressed disbelief in many of the revelations received by the Prophet Joseph Smith. The organization, however, proved a failure as McLellin desired to establish headquarters at Kirtland, Ohio, and David Whitmer refused to leave his home in Richmond, Mo., and soon afterwards denounced “McLellinism” as an error and the movement came to naught.

Another attempt to organize a Church was made in 1876, when David Whitmer baptized his nephew, John C. Whitmer, a son of Jacob Whitmer, and, ordaining him to the office of an Elder, he instructed him to go forth and preach the gospel as it had been taught by Joseph the Prophet, and organize a new church according to the original pattern, in which he (John C.) was to be the first Elder. Of this organization David Whitmer became the virtual head, although he disclaimed that honor, insisting that Christ himself was the only head of the Church.

In 1887 David Whitmer published a somewhat lengthy pamphlet, entitled “Address to all believers in Christ,” the first part of which was addressed to those who were not acquainted with the Book of Mormon or its history; the second part was an exposition of the supposed errors in the Church of Jesus Christ of Latter-day Saints. This later organization of the “Church of Christ,” like the former one, held fast to their allegiance to the Book of Mormon and the New Testament. They ordained a few “Elders,” “Priests,” and “Teachers,” and meetings were held regularly for some time every third Sunday of the month in a small schoolhouse in the vicinity of Richmond, Mo., where John C. Whitmer, their president, resided.

The membership is said to have numbered at one time three or four hundred, most of whom resided in Missouri, but there were a few members scattered around in Iowa, Kansas, Illinois, California, Texas, and perhaps other states. After the demise of David Whitmer on Jan. 27, 1888, the organization did not long survive.

He is now 73 years old but is a wonderfully well-preserved man, tall and erect as a pine, well proportioned, with a military bearing, Roman nose and dark eyes full of fire and expression. His forehead nearly bald, but well balanced (P. Wilhelm Poulson, M.D., “Interview With David Whitmer,” Deseret Evening News, Vol. XI No. 224, August 16, 1878).

Previous: Western Monitor
Next: In the News